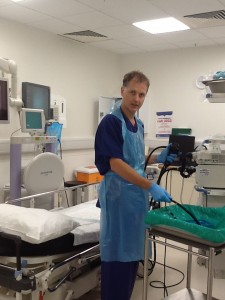 As of 2019, I have performed about 8000 gastroscopies, 3500 flexible sigmoidoscopies and 6000 colonoscopies; inserted approximately 200 gastrostomy tubes; and reviewed ≈ 1000 capsule endoscopies. Auditing my colonoscopy practice in summer/autumn 2011 and 2015, I intubated the caecum in >99% (n=163/200) detecting polyps in 28%/31%. My known life-time complication rate is low (3 admissions for bleeds; 1 perforation requiring surgery following attempted endoscopic resection of a cancer). I have promoted the use of water exchange colonoscopy and water immersion polypectomy, which increases patient comfort and ensures colon cleanliness.

I spend about 25% of my time working for the NHS, and the rest in private and academic practice. In the NHS I undertake endoscopy lists and clinics, looking after patients with a wide range of conditions (including Crohn’s disease and colitis; IBS; peptic ulcer disease; celiac disease; chronic diarrhoea; constipation; nutrition).
The result from my 360-degree NHS patient feedback (2013, and replicated in 2017) was excellent, rated 5.8 by all patients (scale 1-6, where 5 is “very good” and 6 is “excellent”). I have been an active teacher and regularly examined for the Royal College of Physicians “PACES” exam.

I developed an algorithmic educational resource for the European Crohn’s and Colitis Organisation (ECCO), called the ECCO e-Guide. Since its release in 2016, this visualisation of their guidelines has been reviewed by more than 20,000 healthcare professionals worldwide. For this work, I was awarded the ECCO Mark of Merit, an accolade that is only provided to 3-5 individuals annually.

I have been a principal investigator or co-investigator for several clinical trials since 2006. My research contributions have been undertaken entirely freely, as I have a full time clinical role; as Benjamin Franklin (1706-1790) said, “If you want something done, ask a busy person”.

As of 2019 I am leading an exciting project, called WikiMed.org, to provide healthcare advice to the poorest people in the world. This is a MedTech venture- watch this space!

• £12,000 awarded by the All Ladies Palace of Westminster Committee 2010/2012, following peer review to support project entitled, “Development of remote patient data entry in the IBD clinic” (2010/2012). End date 2013.
• £1,000,000 (shared with Dr Siew Ng, in Hong Kong) awarded by the Jessie and Thomas Tam Charitable Foundation, following peer review to support a project entitled, “Inflammatory Bowel Disease Registries in the United Kingdom and Hong Kong. A Comparative Study of Disease Pathogenesis in the Far East and West”. (2012). End date 2017.
• £5000 awarded by Crohn’s Colitis UK for a study of metabolomics profiles in twins with IBD. End date 2017.

Walking, Portugal, my family and children